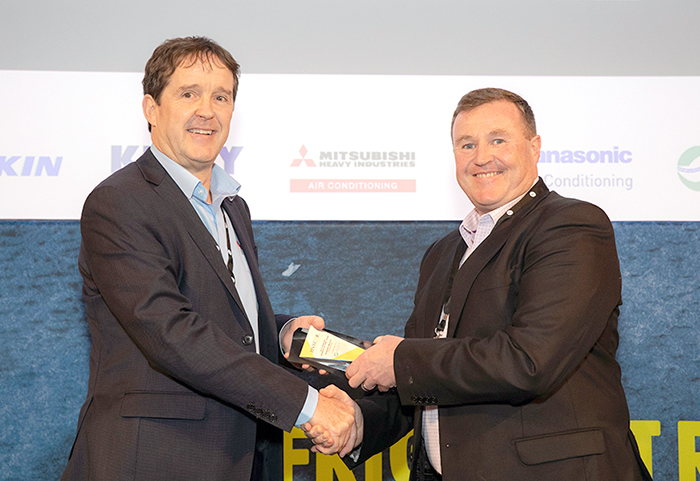 Temperzone Australia General Manager*, Robert Beggs recently won the HVACR Leader of the Year Award. The HVACR awards recognise the visionaries and innovators in our industry, people who are not only propelling the HVACR industry into the future, but designing what that future will look like. The Leader of the Year Award recognises a professional that has a well-established career in the industry and has been involved in both the advancement and strengthening of the industry.

Temperzone News interviewed Rob about winning the award, which he was genuinely proud to have won. Throughout his long career in the HVACR and manufacturing industries, Rob has been involved in standards development as well as industry associations such as AREMA, CESA, RRA, RA and others. He chairs several Standards Australia committees as well as represents Australia on the global stage most recently at international standards meetings in Copenhagen in July and Shanghai in October. In fact when Temperzone News spoke to him recently he had a midnight international web meeting booked that night.

We are proud Rob has received recognition for the many years of representing the industry as a whole in a collective interest manner and within the interest of all manufacturers. Rob has been pivotal in communication with the government and representing interests internationally.

Rob has a reputation of being a highly knowledgeable practitioner who is fair and balanced in his work on behalf of industry. He has a high understanding of regulation which is recognised internationally and Temperzone are committed to supporting Rob’s involvement in representing the industry.

According to Rob, “Australian manufacturing does face a number of challenges. Competing against regions with lower labour costs, paying duty on some parts we import to use in local manufacturing when a complete air conditioner can be imported duty free from some countries and the skills shortage can all make sustaining local manufacturing challenging.

To counter these challenges, we need to be more selective in the products we build and ensure our products have a point of difference compared to mass produced commodity appliances. The emphasis on school leavers to get a university degree has had a huge impact on the availability of a wide range of trade qualified workers. And while making a career in trades more attractive may help to some extent, our industry has also become more technologically complex. Where technicians could once get by with refrigeration skills, now they also need to have a strong understanding of electronics and as more products become “connected” they will also need to develop skills in Information Technology.

When asked about his first three years as the General Manager of Temperzone, Rob said that, “I have really enjoyed my time here, the people are great and I look forward to the coming challenges. Over the last three years we have seen a real consolidation and strengthening of our relationship with the New Zealand office. We are now a more cohesive group, which puts us in a better position to deal with the competition and what lies ahead.

When asked what changes the future does hold for the air conditioning industry, Rob explained that there are several key elements. “Technology is a big one with intelligent buildings, controls and using the internet. The continued drive for energy efficiency and reduced emission is also important. More efficient products combined with green buildings, and higher levels of insulation. And finally smarter controls will play a big part in the future of the industry. At Temperzone we are actively involved in meeting these challenges.”

Rob has a reputation of being a highly knowledgeable practitioner who is fair and balanced in his work on behalf of industry. He has a high understanding of regulation which is recognised internationally and Temperzone are committed to supporting Rob’s involvement in representing the industry.

According to CCN’s Sandra van Dijk, “there was a record number of entries and this year's nominees have taken the competition to a whole new level. The calibre of this year's entries was impressive.” Congratulations on a well-deserved acknowledgement of all that you do Rob!

With the difficulty of presenting our products at exhibitions due to Covid-19, and concern over cancellations and attendance rates, Temperzone has sought an alternative method of delivery.

We worked closely with various developers considering options on how to best deliver a virtual exhibition that is engaging and provides a platform for future possibilities and events.

The Temperzone stand at the recently held Facilities Integrate show in Auckland was themed “A Low Carbon Future with HVAC in Buildings”. As one of the first companies to design and produce commercial HVAC systems incorporating R32 refrigerant, this was a key message about Temperzone's transition to R32 refrigerant.

Temperzone’s OPA2100 ECO ULTRA has been awarded the CIBSE Highly Commended award for the Product or Innovation of the Year - Thermal Comfort category. The Chartered Institution of Building Services Engineers (CIBSE) Building Performance Awards recognise the people, products and projects that demonstrate engineering excellence in the built environment. The awards are open to organisations, both in the UK and internationally