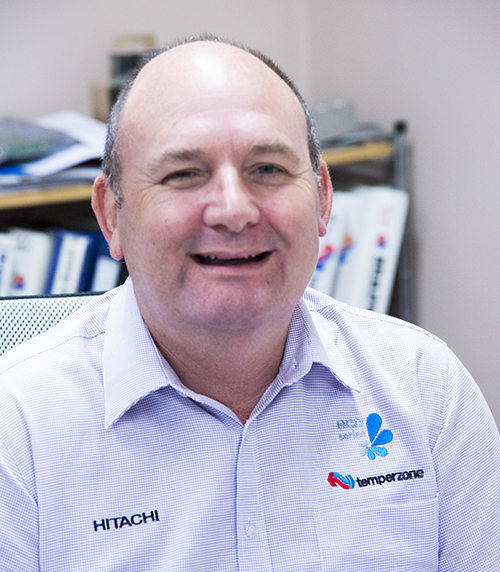 If you have ever called Temperzone Sydney about a service or warranty issue, chances are you have spoken to Mark Howcroft. Mark has been working for Temperzone for an amazing 40 years and according to Group CEO Les Kendall “Hopefully we can squeeze quite a few more years out of him yet. His professionalism is legendary, and it is a true pleasure to have him as part of the Temperzone team and for such a long time.”

Mark actually started his apprenticeship on February 14, 1977 with a company called B & D Electrical which became Bradway Air Conditioning and was then purchased by Temperzone. Les remembered the purchase of Bradway well as he explains, “I first met Mark in 1985 when I arrived in Australia to live, after Temperzone acquired Bradway, B and D Airconditioning and Group 4 Pty Ltd. Looking back, Mark was probably the biggest asset in that acquisition and certainly one of the most enduring. When we talk about Mark we often use phrases like ‘his blood is worth bottling' or ‘if only we could clone him’.”

After serving his apprenticeship as a refrigeration mechanic, Mark took charge of all warranty service in the Sydney metropolitan area. Forty years on Mark is the Temperzone Australia National Service Manager, a position he has held since 1993. During his very early years, while still doing his apprenticeship, there were times when he was the only person in the factory, doing everything from sheet metal, to painting, assembly, installation and service. When asked what has changed in the industry since those days he replied "Just about everything!"

Mark remembers the very first unit that Temperzone Sydney manufactured, “it was a BD225 – and for those of you have been around as long as I have, it was a chocolate brown underfloor package unit.” Mark actually helped build that very first unit.

Queensland Branch Manager Shane McBride has worked closely with Mark over the years and commented, “I can only imagine the changes Mark has witnessed in his 40 years - people, refrigerants, codes, electro mechanical to electronics an absolute lifetime of experience and lots more technology changes and experiences to come.”

To many at Temperzone Australia and in the wider industry, Mark is the guy with the encyclopaedic knowledge of all things Temperzone Technical. His knowledge is perhaps only matched by another member of the 40 year club, Tony King.

Temperzone Director Brett Kendall also added his praise for Mark by saying that, “Having worked with Mark on many a thorny service issue over the years, one can only stand back and marvel at how calm and rational he is under pressure. His vast knowledge and methodical approach to problem solving and customer service is such a precious quality. Temperzone has been lucky enough to have had the benefit of that for the last 40 years. Many thanks Mark. You are an icon within Temperzone and within the HVAC industry.”

Mark is a man of many facets. He is a very fine musician who has played brass instruments since a boy and actively played in brass bands until recently. Until a few years ago, when the Sydney Symphony Orchestra required a Euphonium for an orchestral piece, they called on Mark Howcroft. Mark is also reported to have a fondness for red Triumph sports cars!

Marks attitude to customer service is legendary. It’s best summed up by a 2009 quote. “I’ve travelled as far as China to solve service issues, because when we say we look after our customers, we mean it.”

Mark has travelled far and wide, running training programs for Temperzone. Late last year he was in Far North Queensland and in March he is travelling back to Asia, this time to Singapore, to run a training and product information program on our HWP product with Shane McBride. Over the years Mark has trained thousands of refrigeration mechanics in the technical detail of Temperzone product.

Managing Director Alan Channells commented that in one of their first meetings Mark said he had a strong desire to really understand commercial air conditioning as he had only worked on residential product up to then. He then added Mark has continued to learn ever since and today is without doubt the most experienced and knowledgeable Service Manager in Australia.

Mark has been asked (by many people) what he would do if he had the opportunity to redo the last 40 years, and his answer is always the same, “without a doubt I would do it all over again!”

We think in the end Temperzone Product Manager Gordon Stewart has summed it up nicely by saying, “A great achievement, and a pleasure to work with one of the industries Gentleman.” Hope we didn’t make you blush too much after reading this Mark, but it’s all true!

Well done Mark on reaching the exceptional mark of 40 years’ service to Temperzone.